Why Change to ‘No Till’?

Wherever we have farmed in this land the outcome has been the same:

And yet, conventional wisdom still persists!

Take the term conventional tillage. It’s called conventional, because that’s the way most of us have always done it. The crows love it – eating all the worms and other soil organisms as soon as they are exposed.

But just as crows hover over dead animals, they may well be hovering over an extinct farming industry if we don’t make some dramatic changes!

Let’s look at how “mother nature” does it, after all she writes the rules around here. A close inspection of a stand of virgin, unimproved scrub, will reveal that “mother nature” is continually creating a fertile mulch layer down at its base – rotting leaf matter that is consistently being “topped up” by the trees and grass cover.

This “mulch mat” does a great job of replenishing the soil nutrients and organic matter naturally, and it also provides a terrific seed bed for the young trees and grass to establish in. Even a hot dry wind can’t get at the young seedlings.

Now contrast that with the way of “conventional tillage”. We burn or bash down the crop residue and expose many of the soil organisms to the elements. But why is this so? Why do we do bash the trash?

Have you ever considered just why old conventional style combines had 6 to 7 inch row spacing? We’re told it was to afford a finer seedbed and give better weed control. And it sure does, but at what cost!

On those old combines the tines were usually mounted on floats, four cultivating and four planting tines per float. They were generally only used on good planting rain, and a set of harrows was dragged behind.

Leaving that “all important” crop residue to top up soil organic matter, and protect young seedlings (just like in virgin scrub) was not an option, simply because those old combines couldn’t handle trash. So, many innovative farmers began modifying scarifiers and chisel ploughs to gain “trash flow”. These machines were around 10-inch row spacing, and this became the norm for minimum till operations.

More recent trial work has proven that even wider row spacing – as wide as 16 inches does not reduce winter crop yields. In fact, at Multi Farming Systems, we have proven, time and again, that the ideal row spacing is in fact 13 and 1/3 inches, even across the widest diversity of soil types.

But row spacing is only a part of the story. Another is the ground-engaging tool.

Those modified scarifiers and chisel ploughs usually ended up with some variation of a 2-inch wide speartip, travelling through the ground at around 30 degrees. In so doing they violently “boiled” the soil up and created a seedbed, but at a huge cost.

Aside from losing soil moisture, the rearmost row of tines threw soil into the adjacent rows – the rows planted by the front planting tines.

Now the “buried” seed had to struggle even more to emerge, and we all know how important a good emergence is.

So by adopting 13 1/3 inch row spaces, optimum sowing speeds of 7 km / hour, or even faster can be reached without throwing soil onto the adjoining rows.

In fact, this row spacing leaves a nice little depression over the seed to water harvest available rainfall into. And at the same time, any weeds that may happen to survive up on the hills are actually deprived of moisture, which represents a significant improvement in weed control. 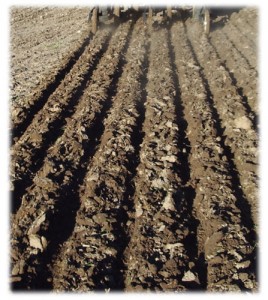 Even more importantly, wider row spacing means less tynes per foot of machine and an incredible reduction in capital costs! Wider row spaces could mean the same acres covered and with less horsepower, or alternatively more acres covered with the same horsepower. Either way, that’s your bottom line we’re talking about!

Now, these wider row spacing are only the second part of the solution – the third part is a spear tip designed to penetrate the soil at a “magic 15 degree” entry angle. 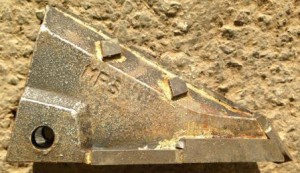 As this “clever tip” moves through the soil at those higher ground speeds, it doesn’t violently boil the soil up like those 30-degree entry angles. The 15 degree tip acts more like a submarine traveling below the surface. Because of its profile and trajectory it churns up just the smallest pocket of soil ahead of the seed placement area itself, and therefore minimises the loss of soil moisture to the atmosphere.

Its worth noting that the recent move to disc openers is recognition of this fact, but unfortunately disk openers leave the ground flat and afford little opportunity for rainfall to penetrate. Water just flows away. They simply can’t moisture seek to maximise the planting window, and no one would dispute that they are very costly to maintain.

All very clever and interesting stuff, but how did Multi Farming Systems arrive at these “blinding flashes of the obvious”?

It was 1985 and David Trevilyan, the man behind the “Multi Farming Systems” name, was faced with the uncertain moisture conditions of central inland Queensland, Australia. In order to just survive, David set about developing a planting machine that was reliable and precise – even over the widest range of soil types and moisture conditions.

The result was the “Multiplanter” & what a result! An innovative system of 2″ diameter hydraulic rams fitted on each tyne, pressurised from fluid held within the centre frame of the machine. As soil conditions vary, the operator simply increases and decreases the pressure to control sowing depth.

The true genius of this idea is in the fact that the press wheel, which is hinged off the centre of the tine, can be adjusted to allow the pressure from the ram to be put on either the point of the tine or the press wheel as required. 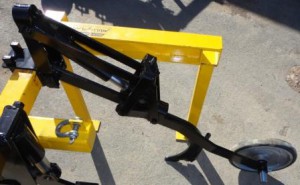 The press wheel is parallelogram controlled so that the planting depth is maintained regardless of the undulating ground it may traverse.

Contrast this to the “conventional” machines where the tyne is slaved to the frame and must follow the machine rather than the ground.

Think about this for a minute. The Multiplanter delivers exact seed depth control across a range of soil types and planting conditions, even matched to historical harvest yield data if you like. (True prescription farming!)

You see, when you combine:

You surely do have the secrets of your farming future!

In one comprehensive trial by Dr Paul Blackwell of the Western Australian Department of Agriculture at Morowa, the results truly authenticated all that we’ve said here!

Dr Blackwell took what could be termed the conventional machines, such as a farmers’ forty foot chisel plough and prickle chain, an “Agrowplow” demonstration unit, his very own “definitive” planter, which he incidentally used as the benchmark.

Then he put them all up against an 8 foot Multiplanter- and the results! An incredible 30% increase in yield over and above what would be expected using conventional techniques – techniques that Farmers are “conventionally” using – and tragically losing with!

Now do you understand why David and the Multi Farming System team approach this whole thing with such an evangelistic fervour.

That potential increase in profitability will make the difference between agricultural success, and the sad death of lifelong family hopes and dreams.

Ultimately it’s the secret to the global farming industry… that not only will survive, but even thrive!